What I made this week

A hand and arm constructed out of laser-cut folded paper panels:

An almost-completely closing arm made of laser-cut folded panels

A sculpture with two hands facing, one 3D-printed and the other sliced and cut. This is a variation on what I initially wanted to do for this "Digital Bodies" week. I only had time to do it several weeks later, in December. 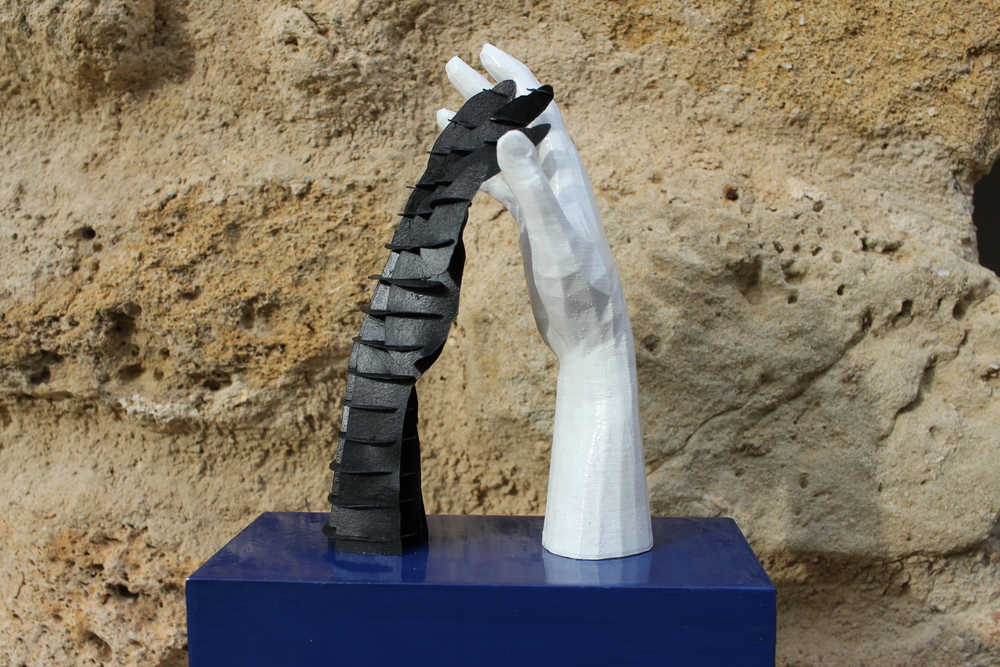 In this week's lecture, we talked about the representation of the human body, throughout history, and as a canvas for the designer. The way we work on this canvas has changed over time, as the tools and uses changed.

In the article Old media, digitized, make new forms (2012), Martin Gayford points out that "digitalization is everywhere, including the artist's studio". Technology is about extending the limits of what we can do.

During the lecture, I was very inspired by geometrical representations of the body, especially by the following pieces (you can click on the images to go to their respective websites): 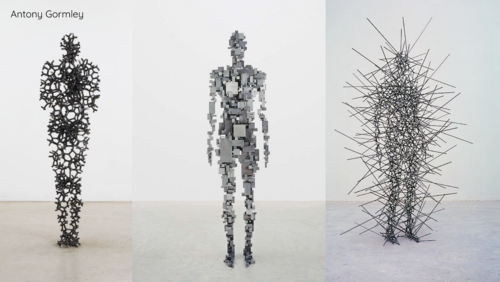 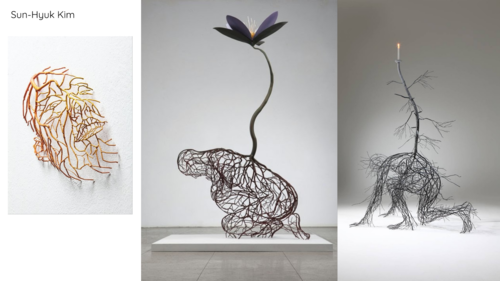 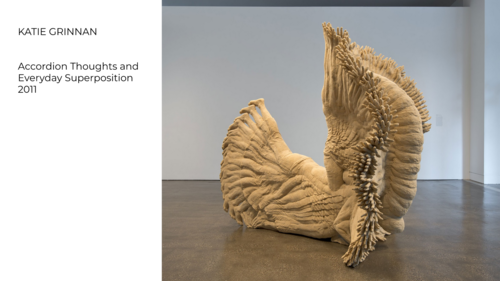 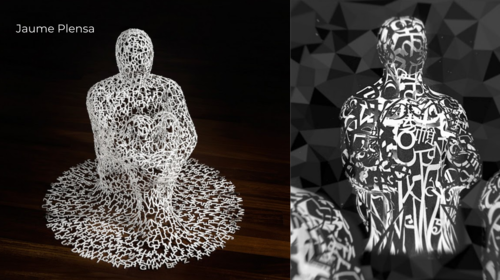 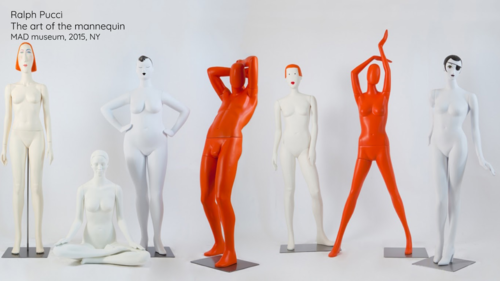 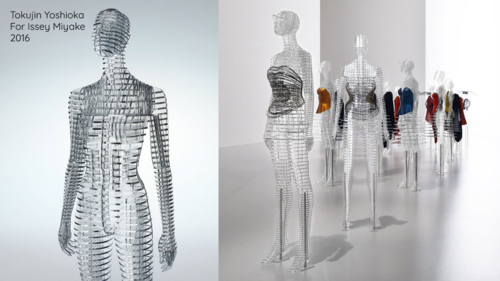 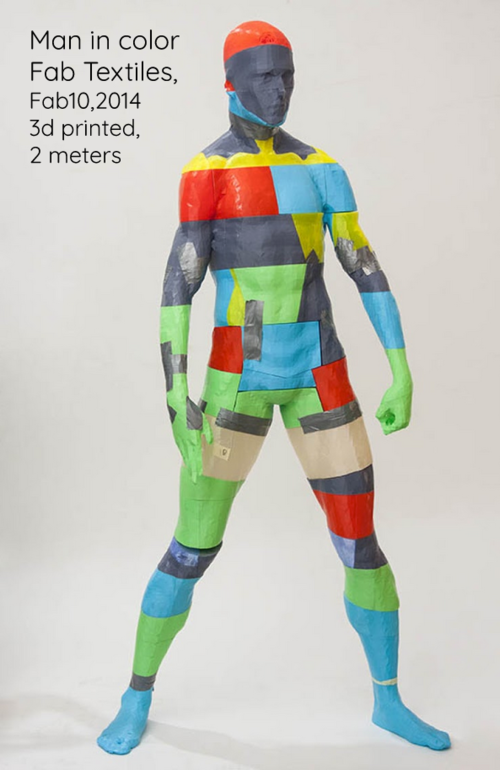 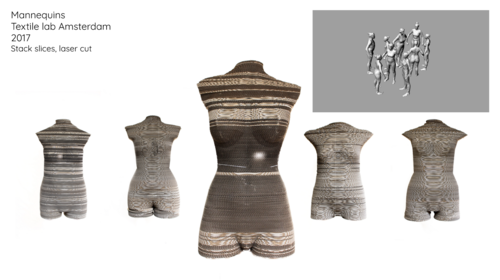 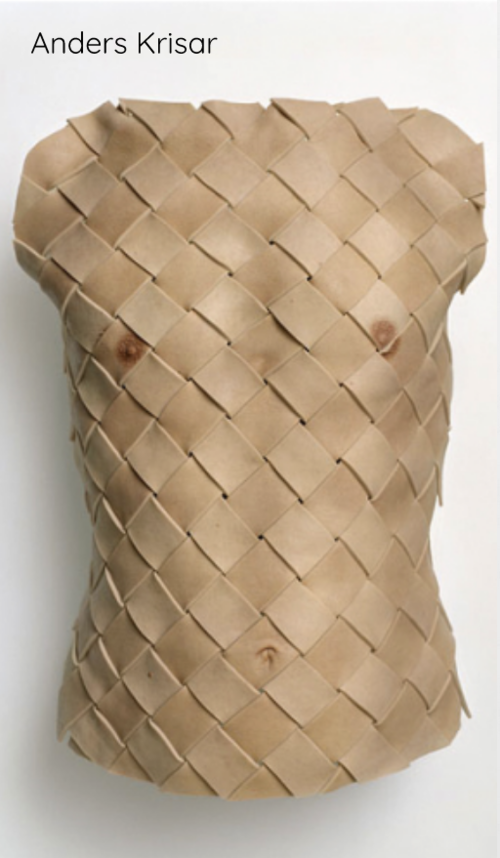 👐🏼
This week, as we'll learn how to use many different tools and machines, I decided to focus on only a part of the body: the hand, which has a strong symbolic meaning around creativity, and is our most basic and yet complicated "tool of tools".

To scan in 3D, we used a Kinect 360. It uses an infrared camera to calculate the depth around the object.

Head scanning process with the Kinect

Here is my arm, scanned in 3D. The fingers are not quite there, and the result is not very precise, probably because I moved a bit while scanning.

Diane's arm by dianewakim on Sketchfab

I also scanned my head, because I was curious of what it would make of my hair; I like the result! I might 3D-print it afterwards!

Diane's head by dianewakim on Sketchfab

I started downloading 3D models from the Free3d website. At this point I was a bit all over the place, downloading all the free models I liked:

I then experimented with the rendering of a hand in Slicer:

I liked the stacked slices, the rendering in the palm made me think of hand lines; I also liked the folded panels, because it makes me think of origami or old 3D in video games

🧰
Slicer for Fusion 360 is a tool by Autodesk, used to slice a 3D object in 2D parts. It is not maintained anymore, but you can still download and use it.

Coming from a technical background, it is very interesting for me to learn how to use this kind of software in a more creative way, asking myself what I want to do with this, rather that just executing a technical goal set in stone.

At some point I realized I could split all the panels 🤯 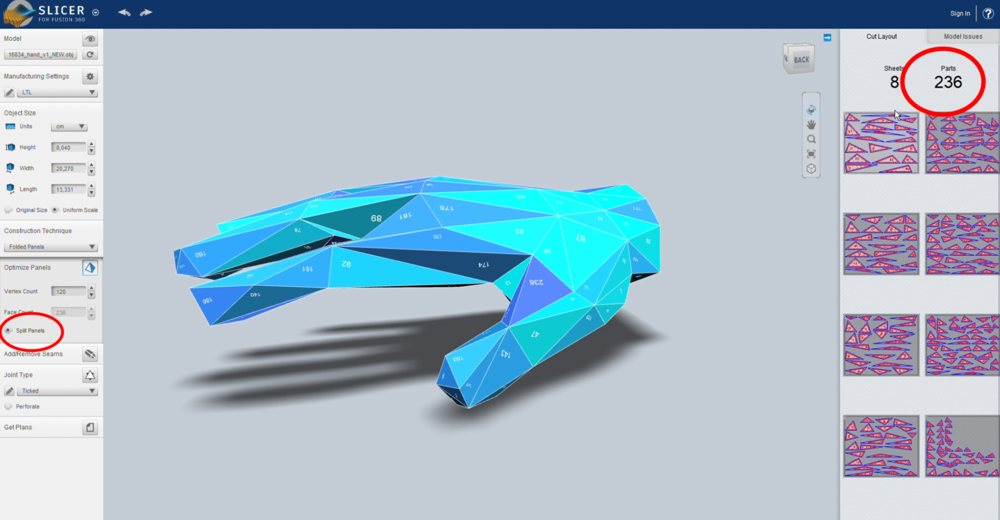 I really liked this 3D model of entwined hands with the forearms: 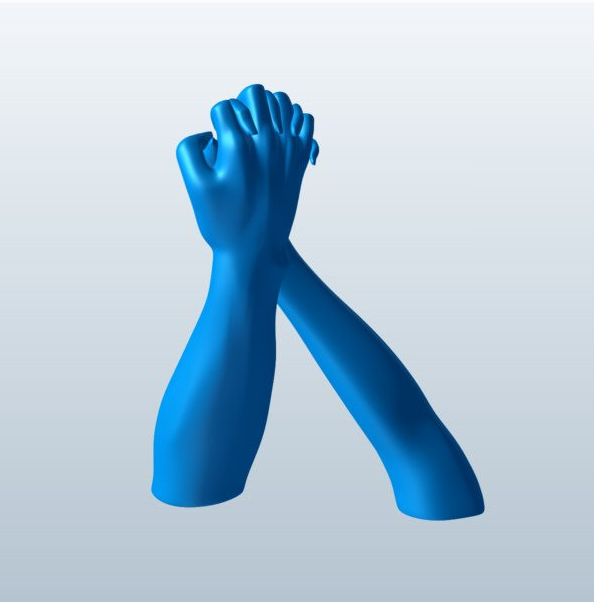 Screenshot from the model from free3d

I find it reminiscent of sculptures by Rodin, who produced different studys around entwined hands, in different materials (stone, bronze...).

Sculptures by Rodin, from left to right: "Le secret", "La cathédrale", and a study of hands

I decided i wanted to make these entwined hands, but with each hand sliced in a different technique: 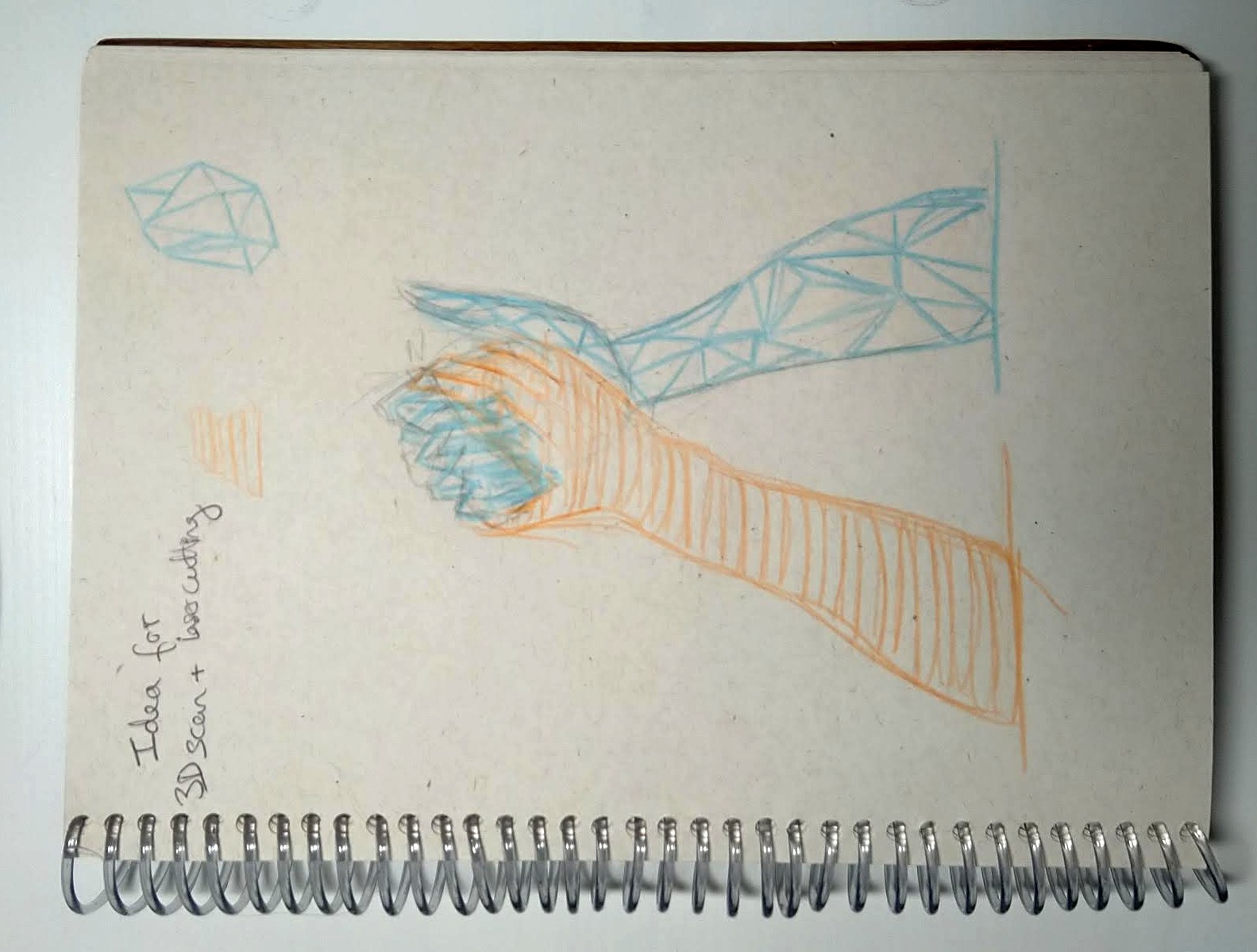 I made this drawing of one hand with stacked panels, the other with folded panels

I did not interlock the fingers here contrary to the 3D model, because it would be too complicated to interlock fingers with the folded panels hand. I also could not directly use this 3D model from free3D, as the hands in it are too tightly interlocked for me to separate them.

So I decided to create a 3D model of one hand and arm, that I would mirror to entwine.

I created different models in MakeHuman, trying to find poses where there was a hand that looked at least a little bit like what I wanted: 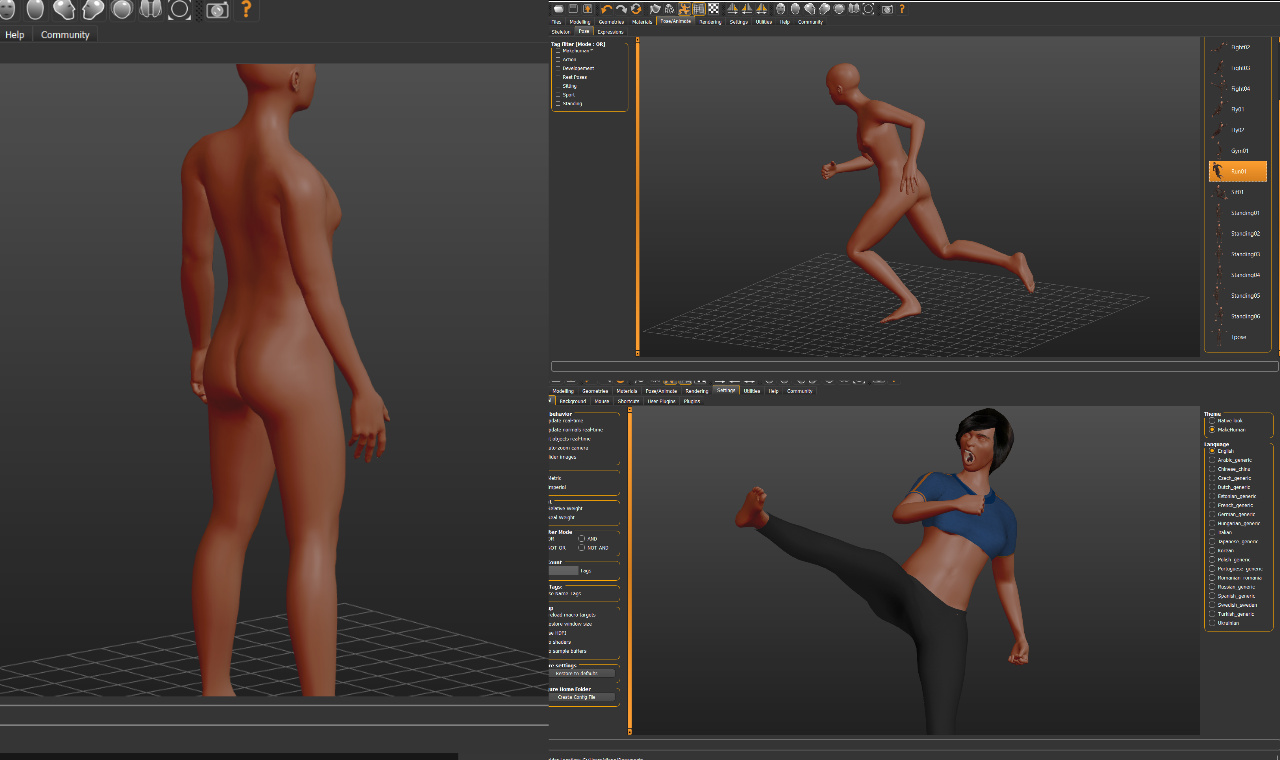 Screenshots of poses in MakeHuman

I did not specify many measurements for the figure, as I knew I was only going to use the arm. I exported the "running" and "standing" poses, not knowing yet which one would work best.

🧰
MakeHuman is a free and open-source 3D software, used to design and prototype humanoid figures. To use it, download it for your specific operating system, and play with all the measurements to create a figure. I found it intuitive to use, and the official documentation is very extensive and understandable.

Using Rhino 6 to extract only the arm

I then used Rhino to cut only the part I wanted, using boolean operations and blocks of 3D mesh. I used the four view panels to help me see where I was creating and moving the boxes.

🧰
Rhinoceros is a proprietary software for CAD (Computer-Aided Design) and 3D graphics. It is used in industrial design, as well as for prototyping, 3D printing, architecture, etc.
It is quite expensive, but has a free trial period of 90 days, and not-so-expensive Educational version. It is also arduous to learn, as it can do many things. I mainly used the features that were explained in last Wednesday's tutorial : 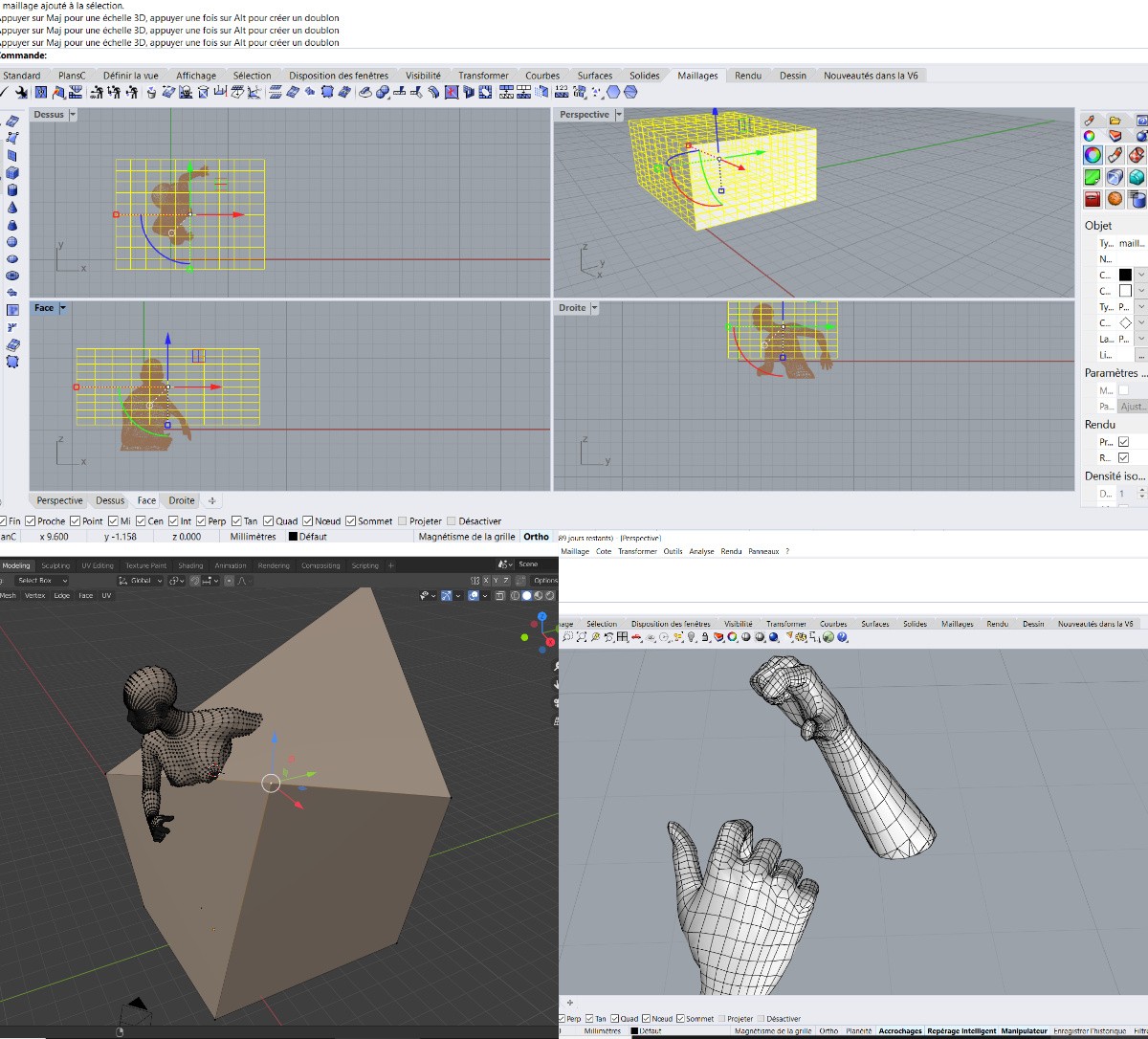 I then mirrored my hand, but I realised that the position of the fingers was too closed for the hands to entwine. I was also concerned that the "paneled" hand would be impossible to construct if the fingers were too widespread. At this point, I decided to cut off the fingers from another hand, and merge them back to this one in a different position.

Well, the joints were bit weird-looking after that...! I exported this hand as a .obj file, and decided to smooth it out in Meshmixer.

🤓
I first tried to use Blender instead of Rhino, as I had used it a few years ago. I realized it had been more than "a few" years, and that the interface had totally changed. I was lost, and did not manage to do what I wanted to, so I decided to switch back to Rhino. I will try to catch up on Blender later on.

Using Meshmixer to smooth the joints

I imported my 3D arm into Meshmixer, and used the bubble brush and pinch brush to smooth the joints, and "suture" some of the fingers together:

🧰
Autodesk Meshmixer is a free software used to manipulate 3D meshes. Using it feels more like using clay or sculpting.

Using Slicer, for real this time

In slicer, I played with my final 3D object with the two techniques I wanted to use:

This one was quite straightforward. The only thing I wanted to change was to orientation of the stacking: 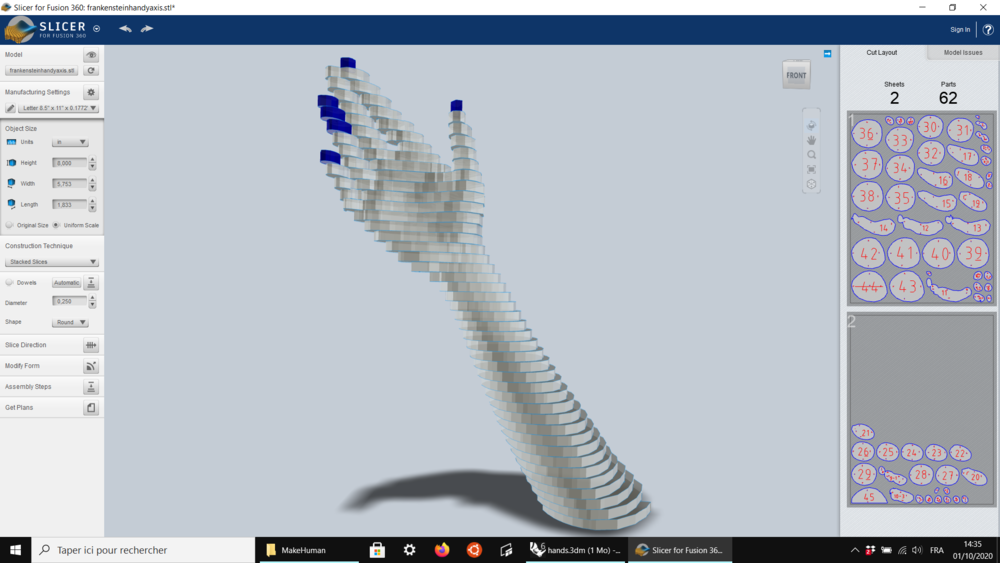 I exported the plans, but unfortunately we were not able to laser cut it this week: the machine we have at Le Textile Lab is too small for this material, and the lab where we will be able to do it was not open. Hopefully we can cut it next Wednesday!

For this one, I had to fine-tune the vertex number: I did not want to have too many panels, especially on the fingers parts, but I still wanted it to be a recognizable hand. I lowered the vertex count to 102, and moved some of the seams. 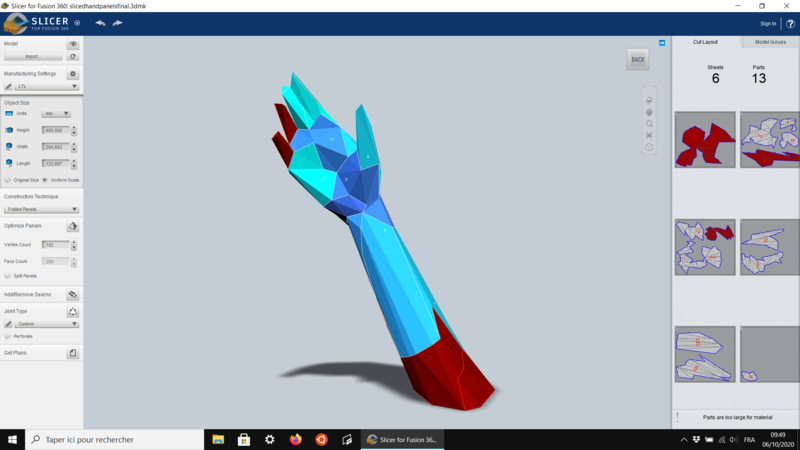 This one can be printed on the Laser cutting machine we have at Le Textile Lab, so I created a new material size for it: 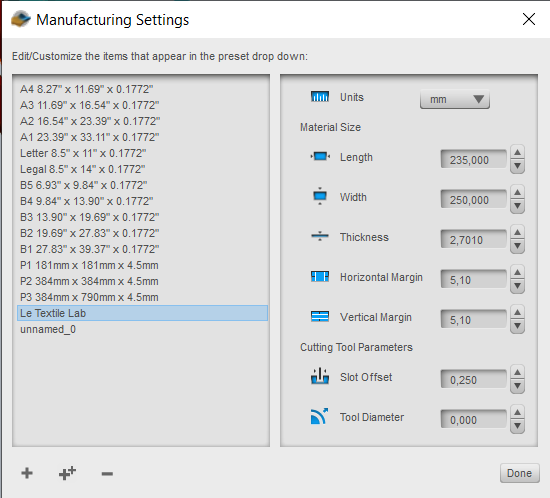 I exported these plans in .dxf, to try and optimize them in Rhino.

Using Rhino to optimize the plans

In Rhino, using only the top view this time, I selected the plans and used the following commands to have closed lines for each part of the plan:

I then cleaned some of the fold lines that were too close from the side of the piece: 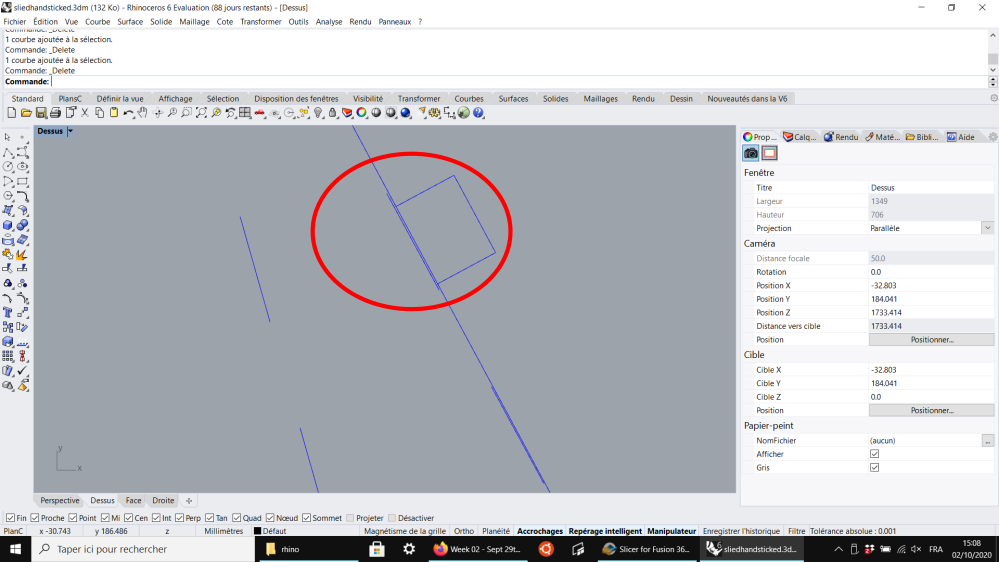 I also optimized the space taken by the parts, removing one of the sheets:

From the Slicer plan: 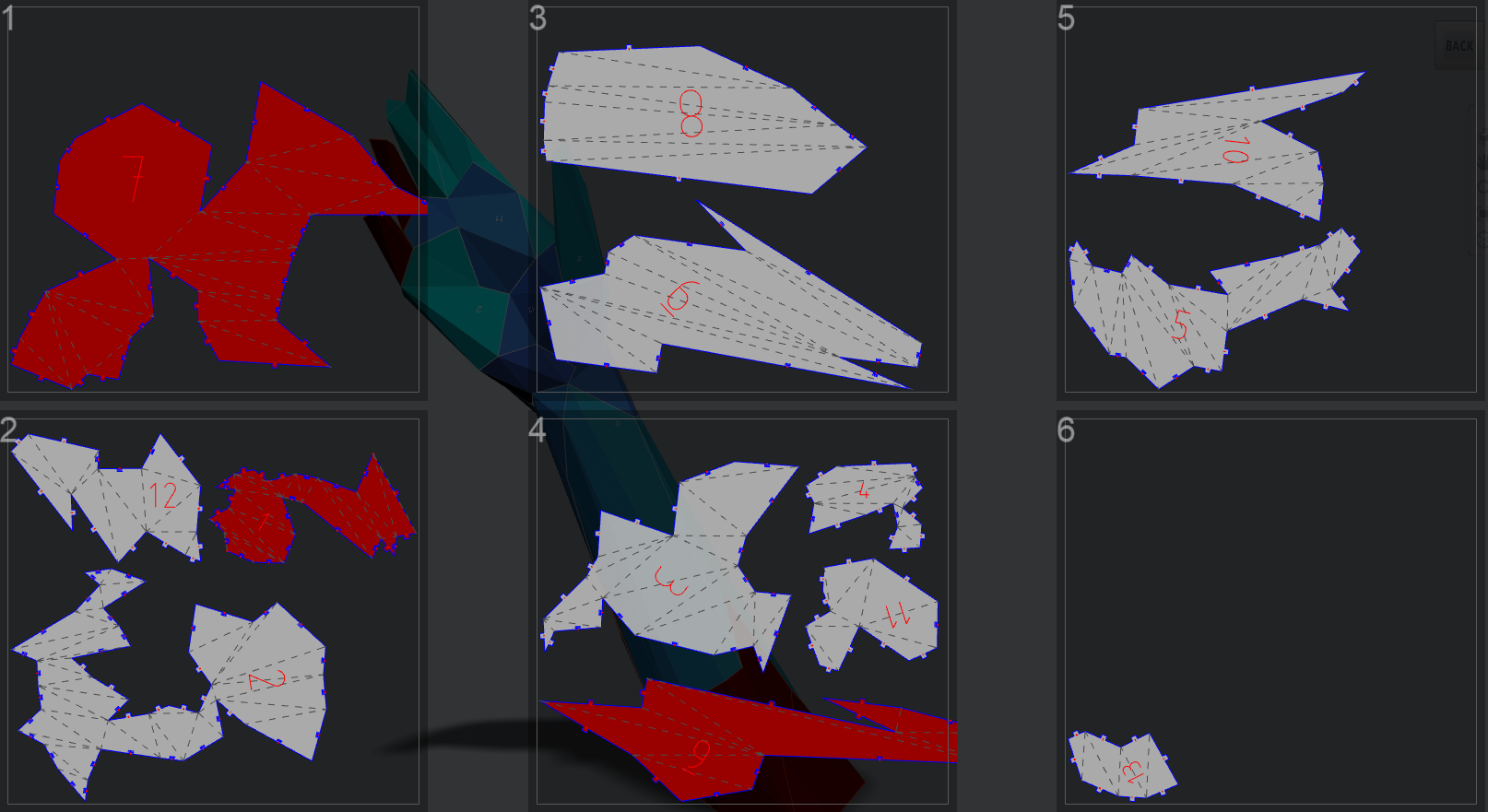 To the optimized plan:

💡
When importing the plans in Rhino, the numbers on the parts and all the annotations might be in 3D, I have no idea why. To fix this, you can select the whole object from the top view, and type the "Make2D" command to flatten it. You can also avoid this problem by checking the box "Ignore thickness" when importing the files.

In the Textile Lab we have the ZMorph VX, which is a multitool machine: it has different heads that can be used to 3D print, laser cut, or extrude. 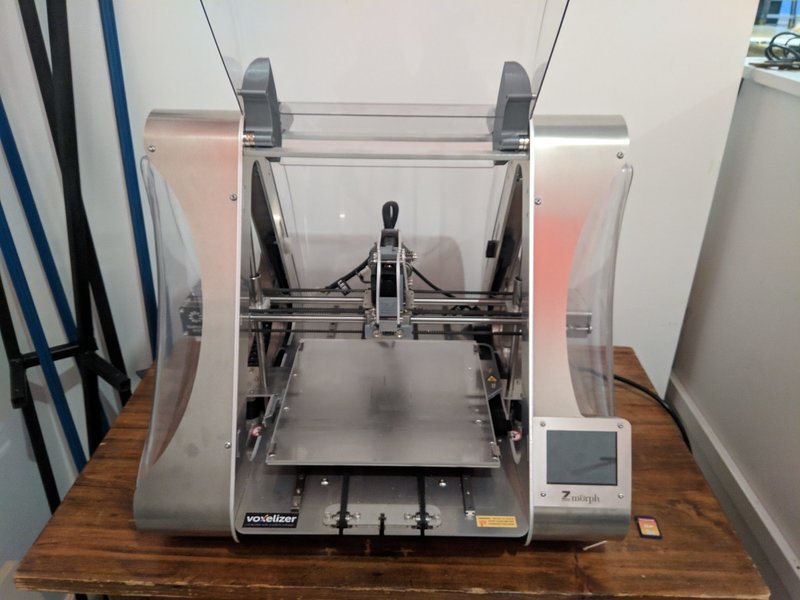 The software used to prepare the plans for the machine is Voxelizer. There are several steps to observe to go from our .dxf plans to .gcode files that the machine can interpret. For each page of the plan:

The result is a .gcode file that needs to be loaded on an sdCard inserted in the machine.

The material is fixed to the board, and the machine needs to be calibrated on all its axis, in order to start at the right point.

When using the machine, never leave it unattended, and always wear protection. 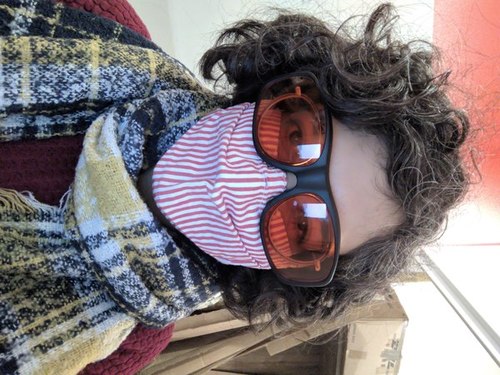 I first tested one of the plans, the base of the arm, with a white drawing paper (180g/m²). The result was quite concluding, and this part was easy to fold: 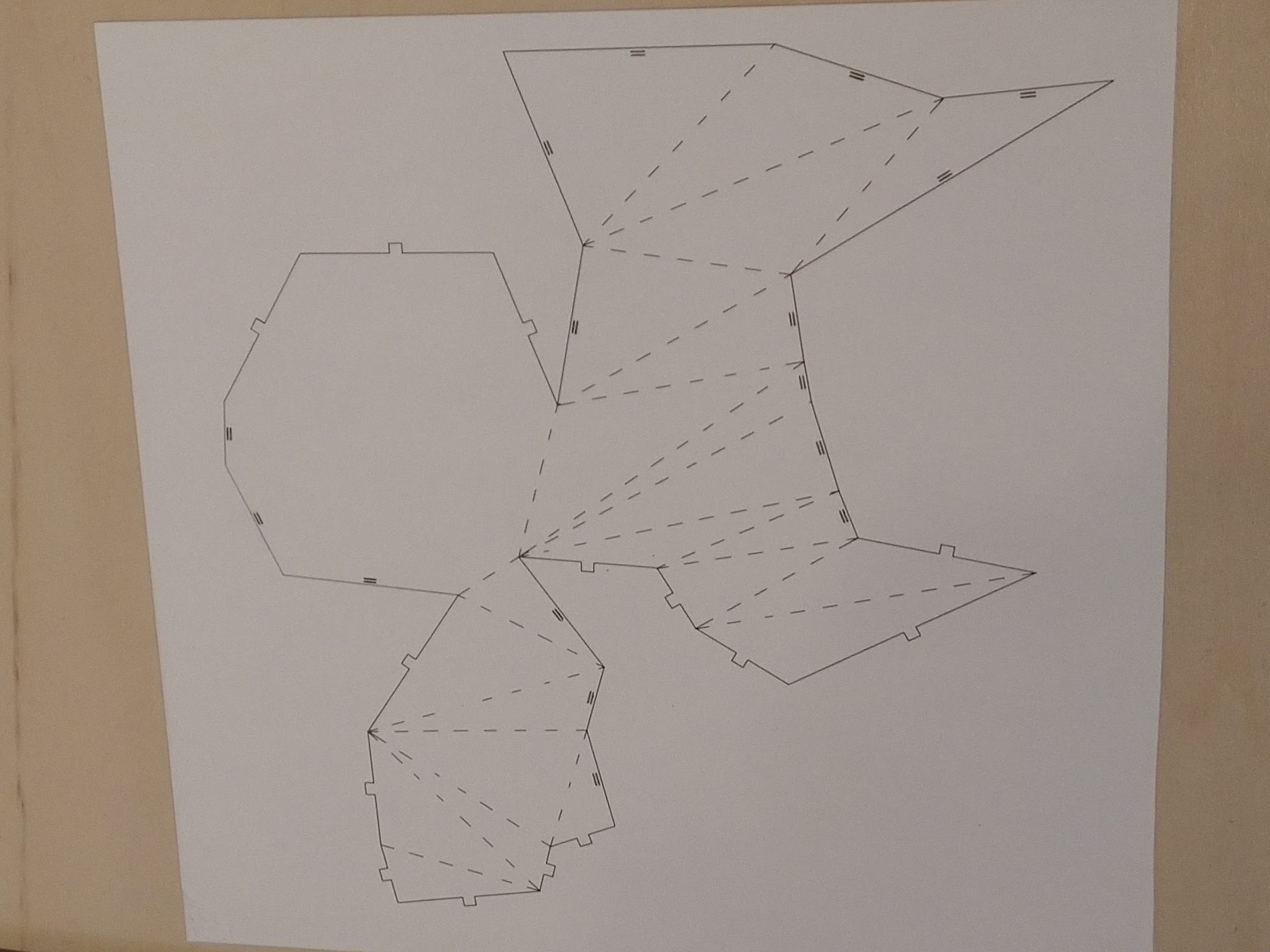 I then decided I wanted to cut it out of colored paper (because why not). This paper is a bit thinner (160g/m²), so I increased the laser speed a little bit. My first test was a semi-fail : the speed was good, but I did not calibrate the machine correctly, so the laser went past the edge of the board (oops): 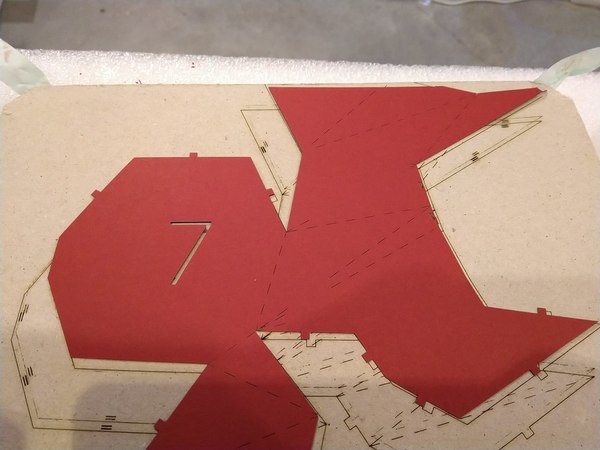 The final cut looked like this for all the plans: 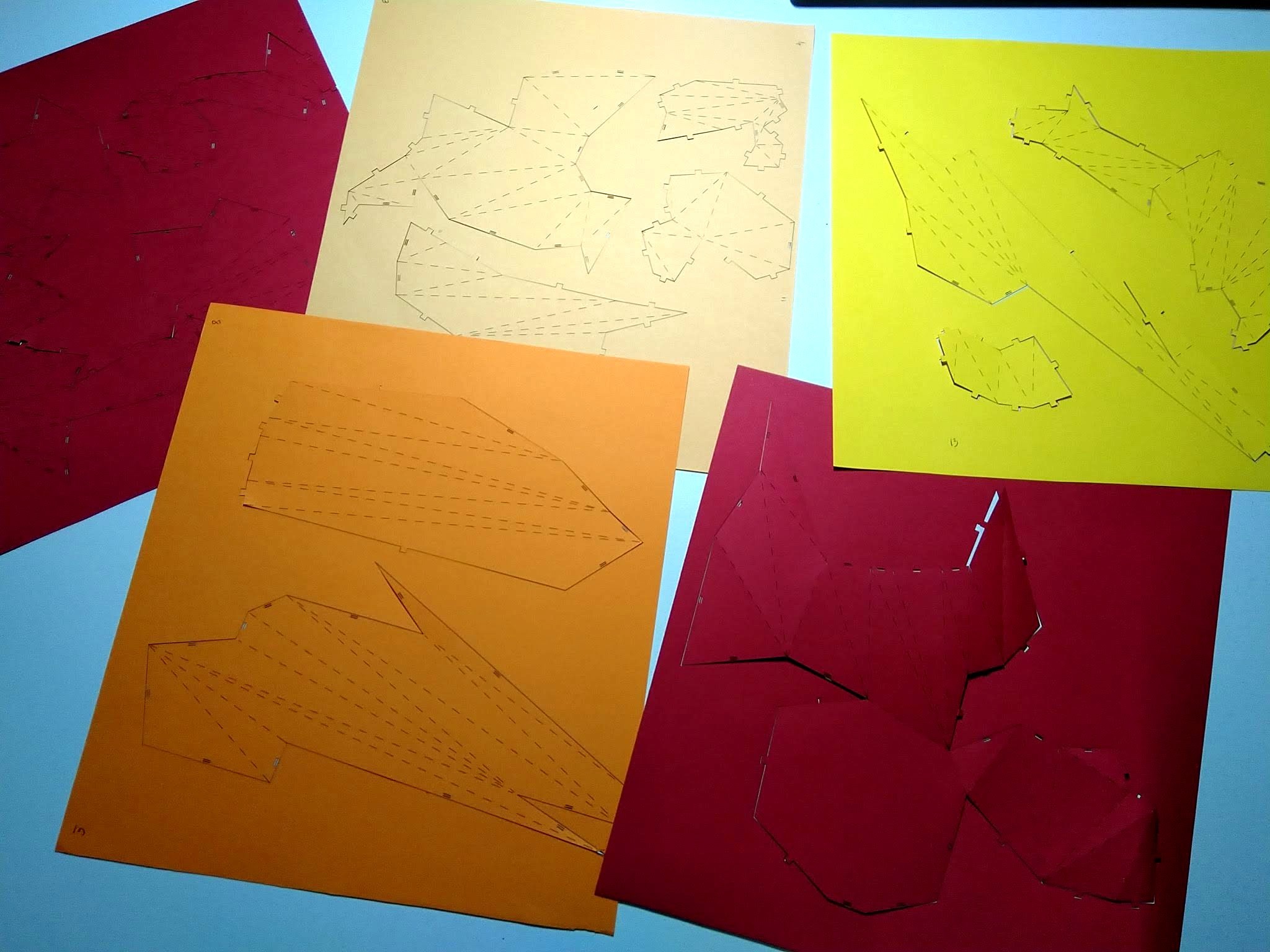 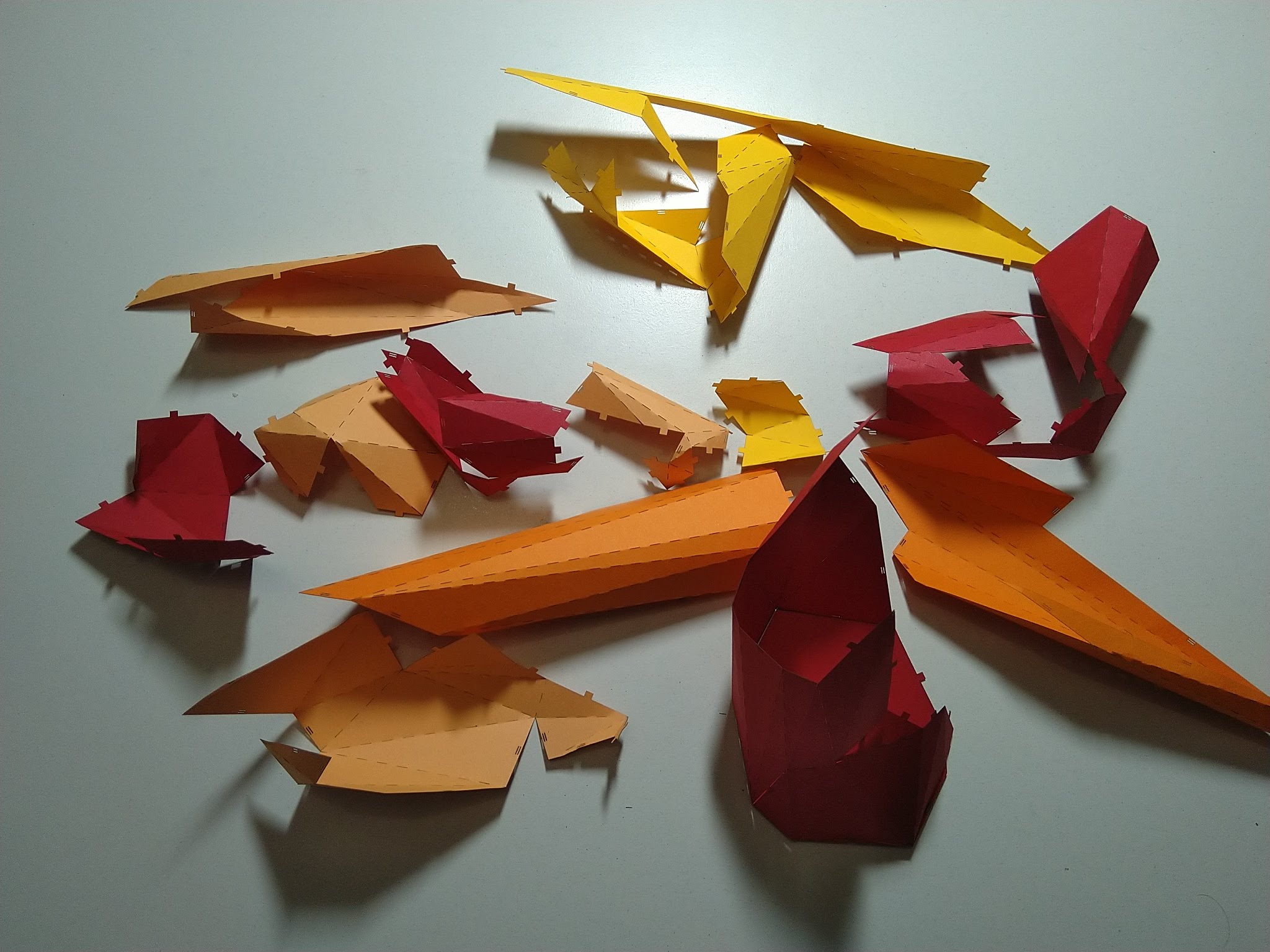 What I could improve

🔺 In the folded panels hand, I could have fewer vertex: I don't need that much precision in the hand, and I'd rather it be a block that's easier to construct;

🦾 I could have less inclined arms, so that they can be standalone pieces;

🖐🏼 When assembling the panels, I should have started by folding the fingers, not the base...

🔧 I could maybe use another type of joint, a sturdier one.

I decided to remake this mini-project for a sculpture that would be a Christmas gift :

I modified the hand model so that is would be less inclined and able to stand on its own. I also shortened it, mainly because to 3D-print it in our machine in one piece it had to be shortened!

The model of the paper hand in Slicer, and the plans laid out in Rhino

The 3D hand in Voxelizer, on the right with the printing supports 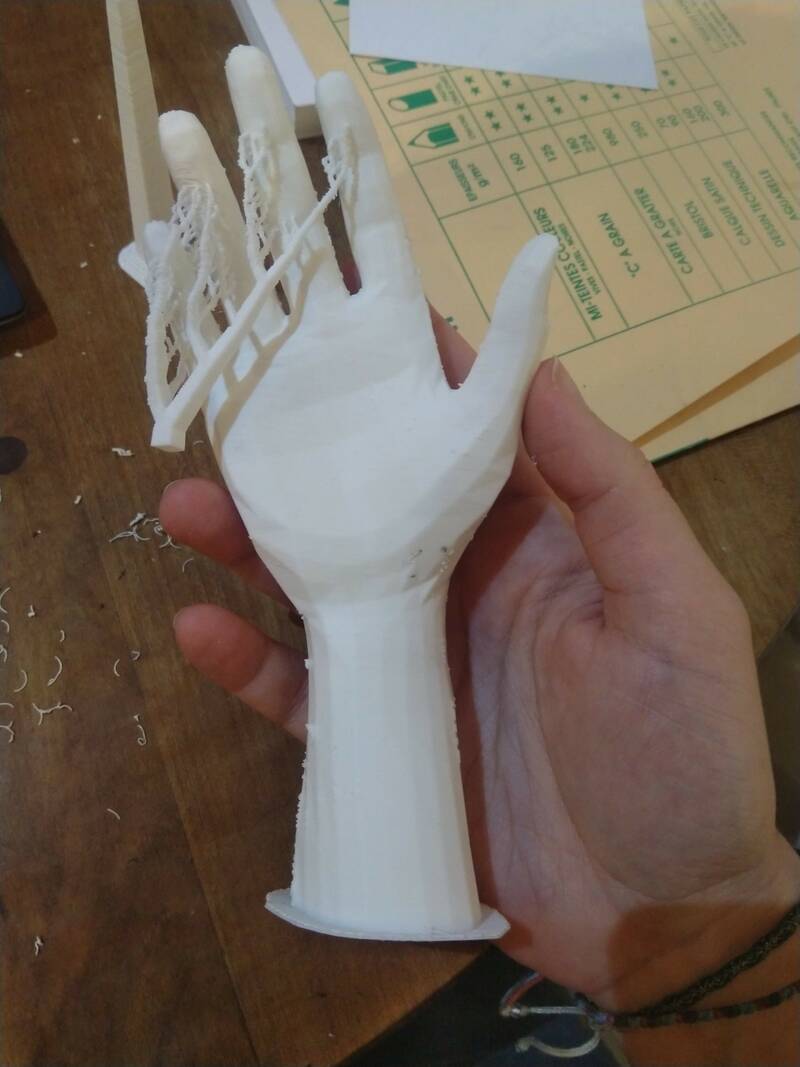 The 3D-printed hand in PLA, before removing the printing supports

After removing the supports, I sanded it and painted it with acrylic paint, so that it would be smoother.

Unfortunately I don't have a video of the assembly of the sliced hand, but I might do this sculpture again and make it then. It is cut from thick drawing paper, which I varnished lightly before assembling.

Both hands were then stuck to the base, which is actually an old phone cardboard box that I spray-painted blue. The final sculpture looks like this: 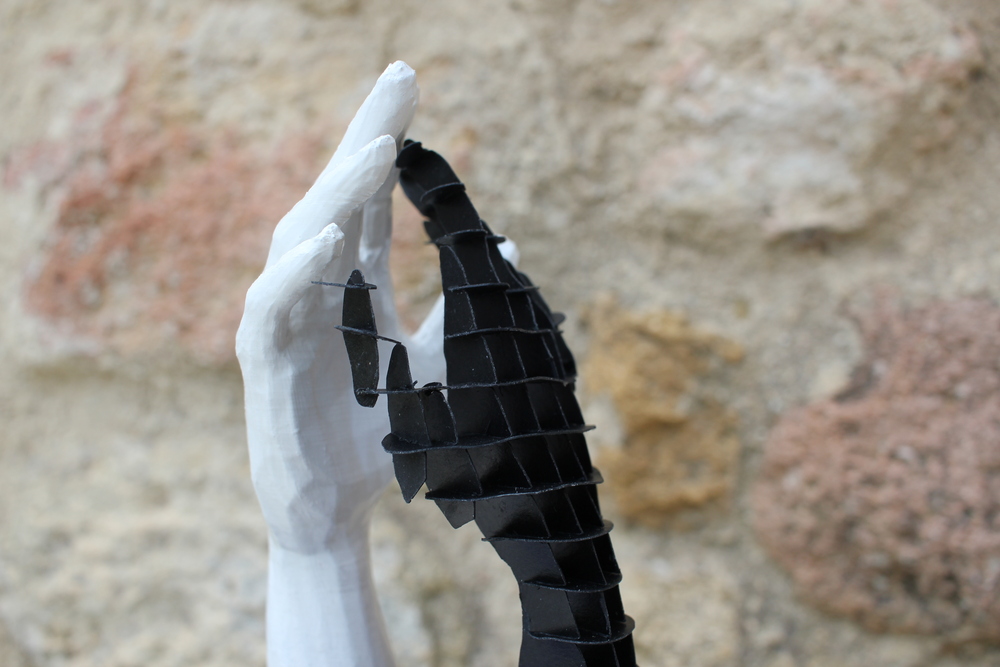 You can download the files I used to make both these mini-projects: