What I made this week

A sweatshirt that lights up!

In this week's lecture, Liza Stark explained all we needed to know about circuits and sensors : how to create them, what tools and materials we need, and how to make connections between hard materials (electrical components, boards) and soft materials (fabric and thread, conductive or not).

I already had a pretty good idea of how an electrical circuit works, but not in a very practical way; after this lesson I feel more confident in what I can do with this. In addition to the great slides from Liza's lecture, I have started a playlist of videos I found useful this week. 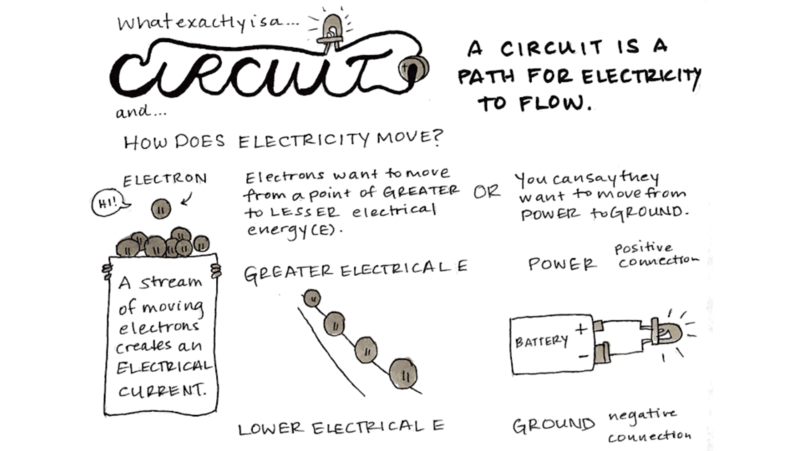 A slide from Liza's lecture

She also gave us many examples of artists and makers creating with both fabric and electrical circuits. Here are some of my favourites (click on the images to go to their respective websites): 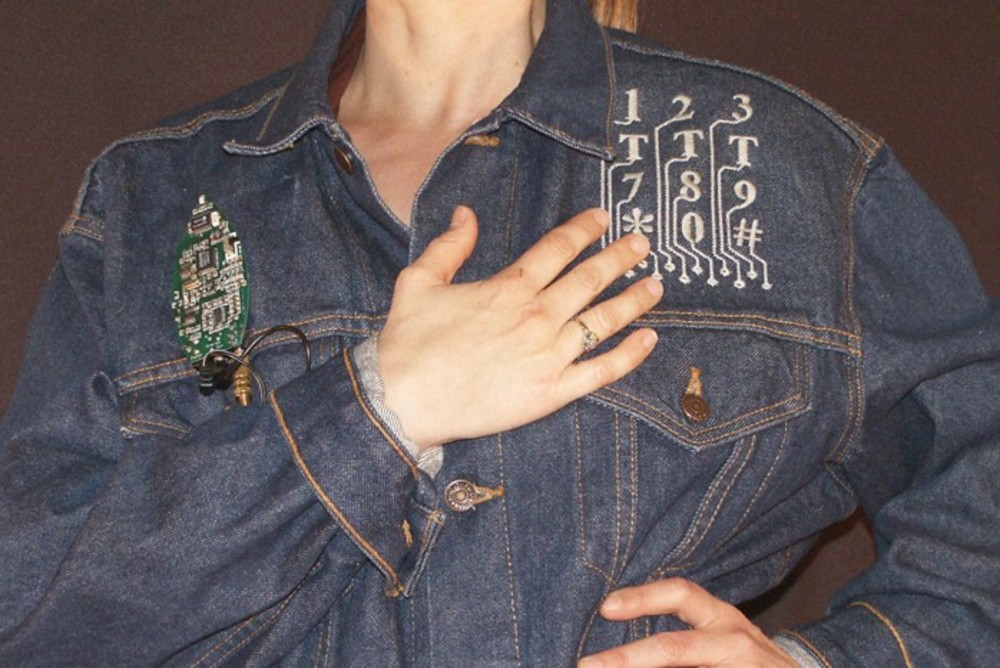 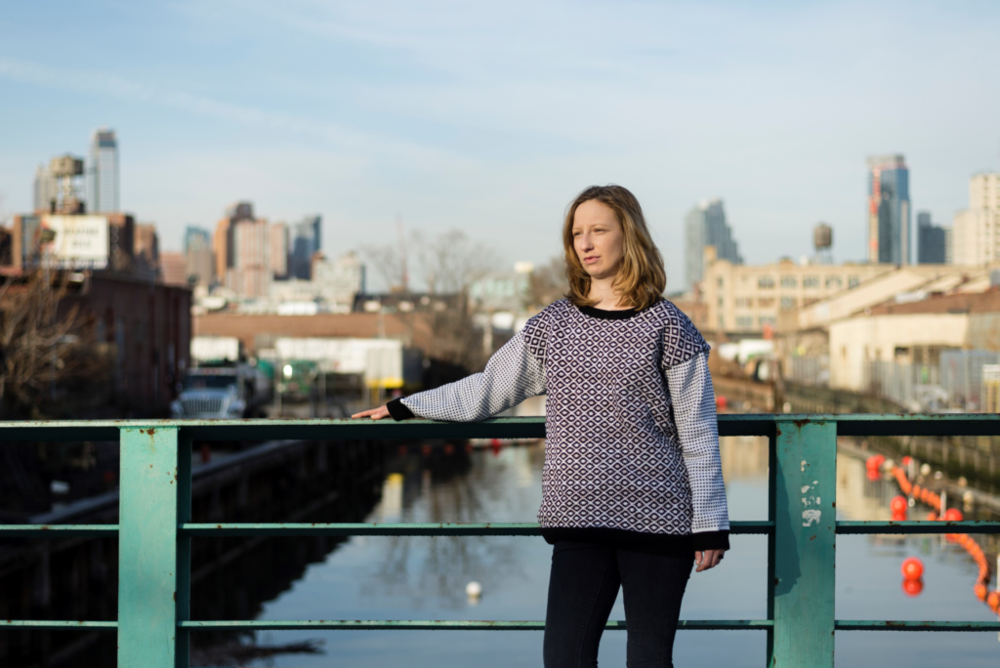 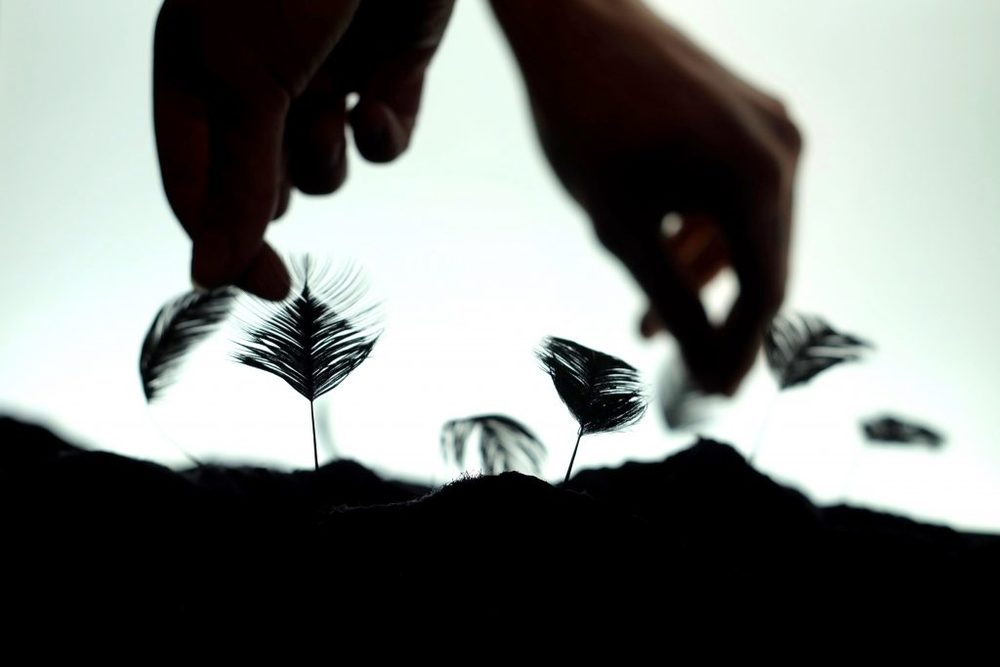 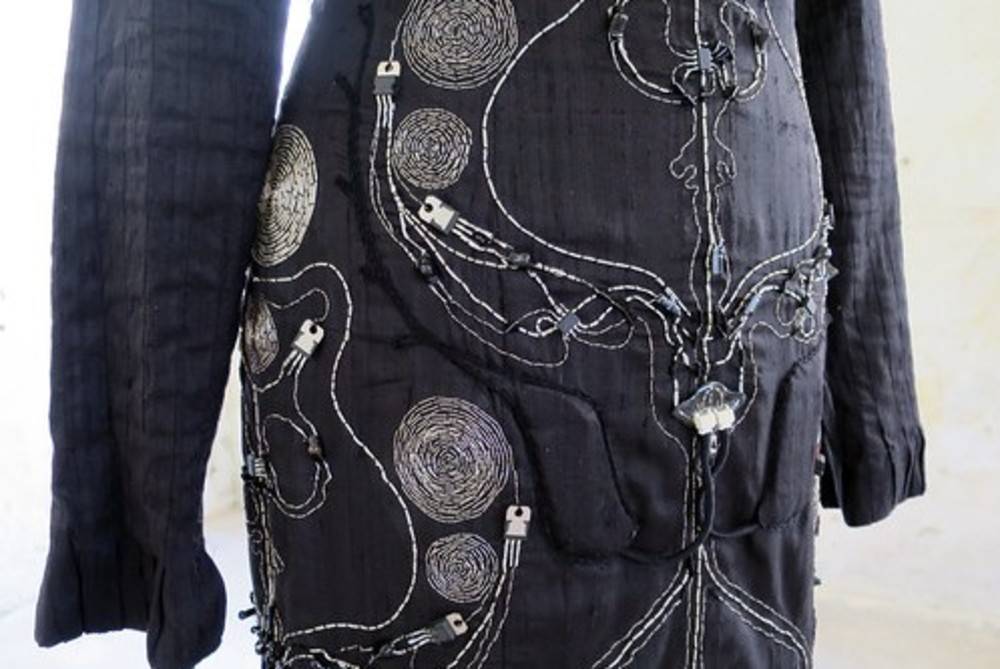 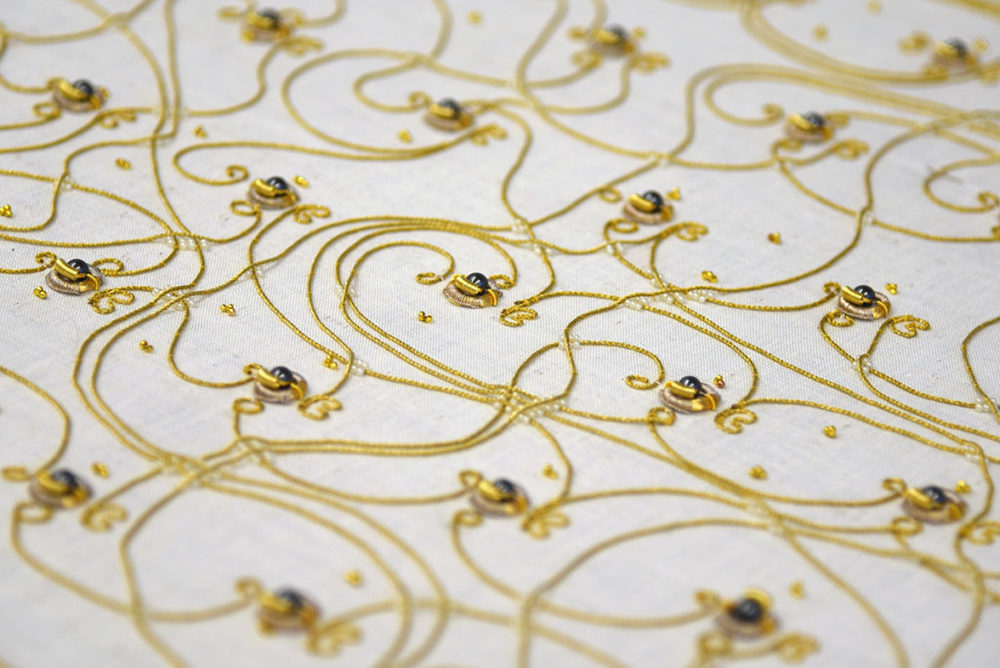 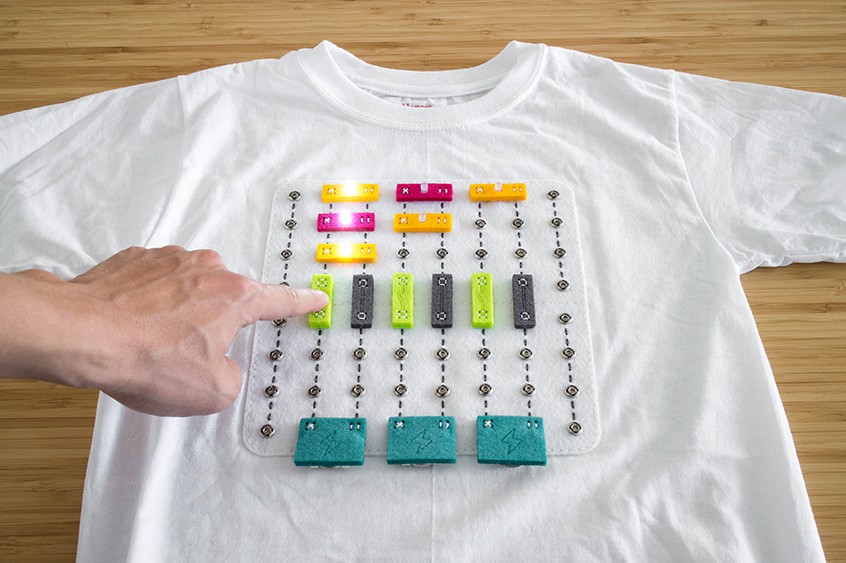 🕹️
Our task this week is to create sensors:

To create my digital sensor, I wanted to use a snap button as a switch. This kind of switch is called a "toggle" switch: it stays on (or off) when you action it.

The first thing I did was testing a basic LED circuit with a battery, and then adding more LEDs to it. I first tried to add them in series, but it only worked with a 9V battery, not a 3V one. That's because when in series, the voltage is divided between all the LEDs. My circuit needed to be in parallel!

A basic circuit with one LED and a resistor

🧰
Sidenote: I had a lot of resistors, but did not know their resistance value: I used the multimeter to test them. The multimeter I have has an automatic scaling of the units: 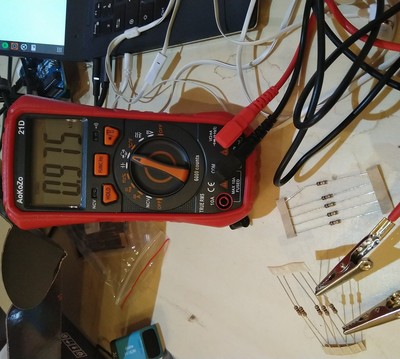 I had to change my design: 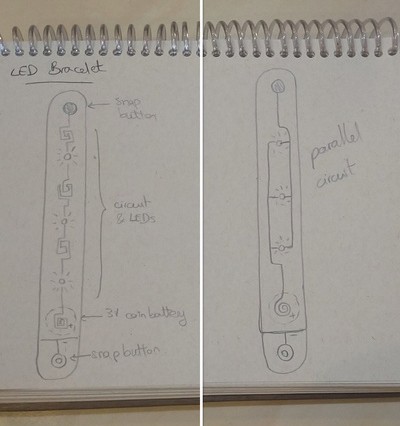 From a series circuit idea to a parallel one

Here is the schematic circuit I ended up making: 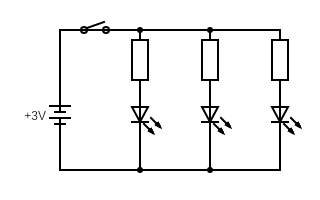 The different materials I used for this: 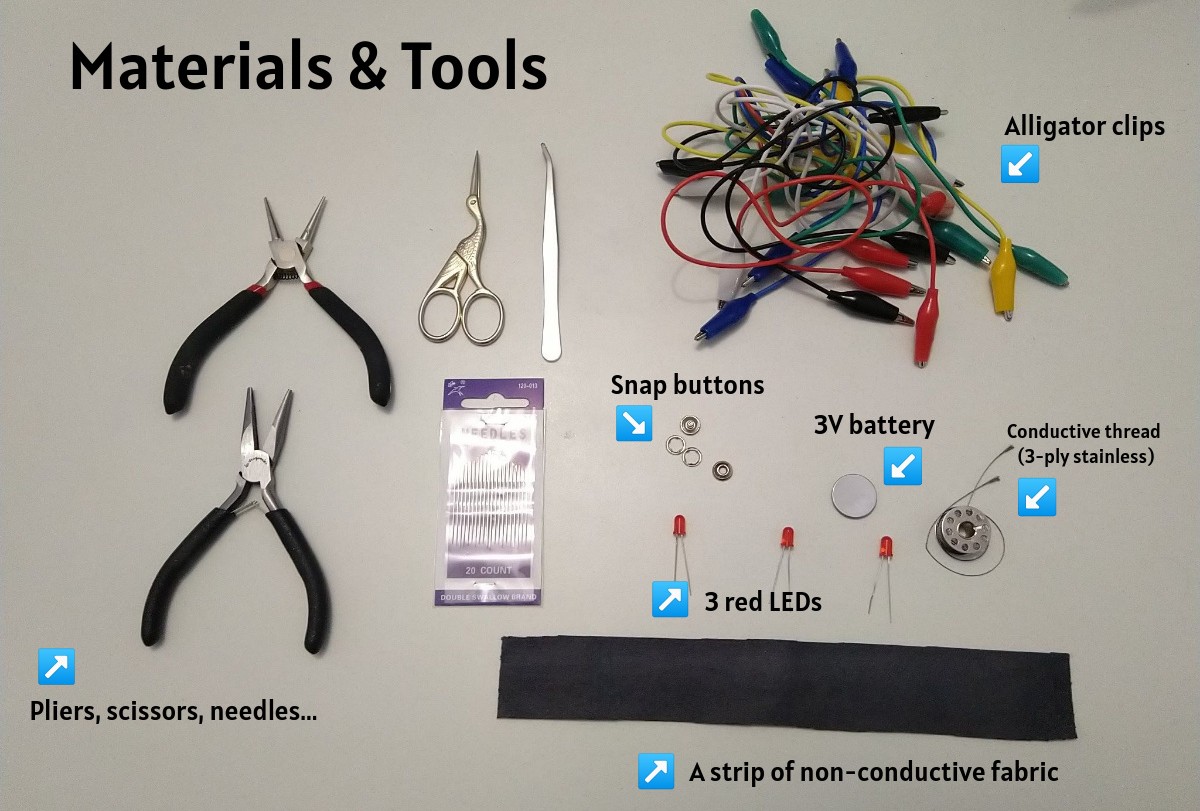 The tools and materials I used for the bracelet

I had different problems with this: 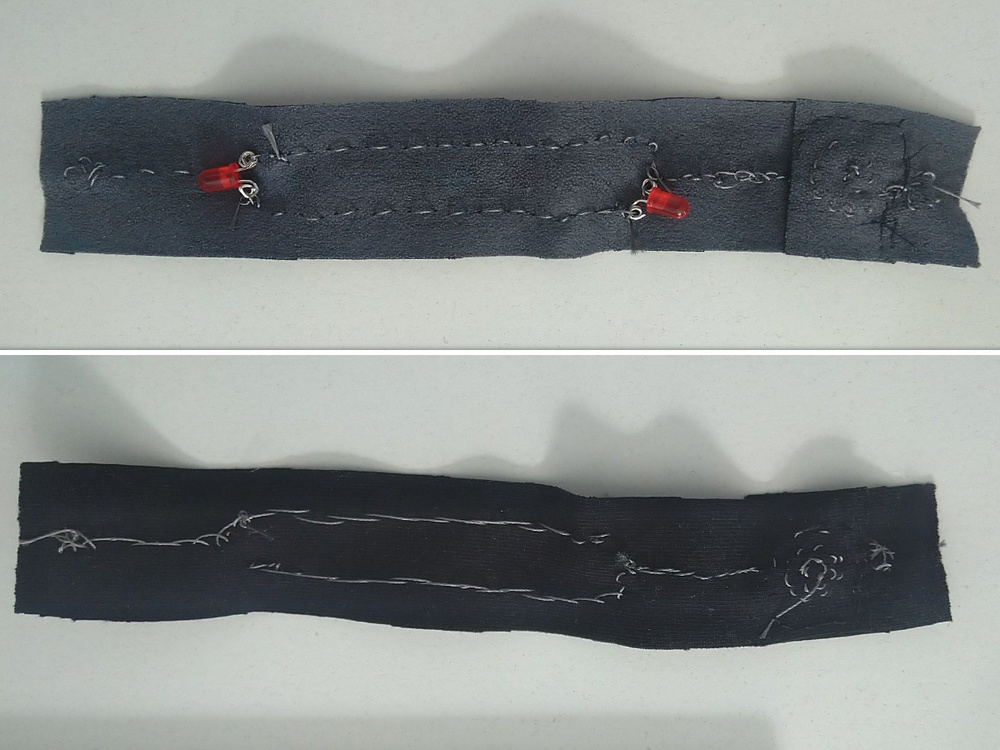 I was not very happy with it at this point, so I did not even put on the snaps and decided to re-do it with a sewing machine and a different thread (Madeira) in the bobbin: 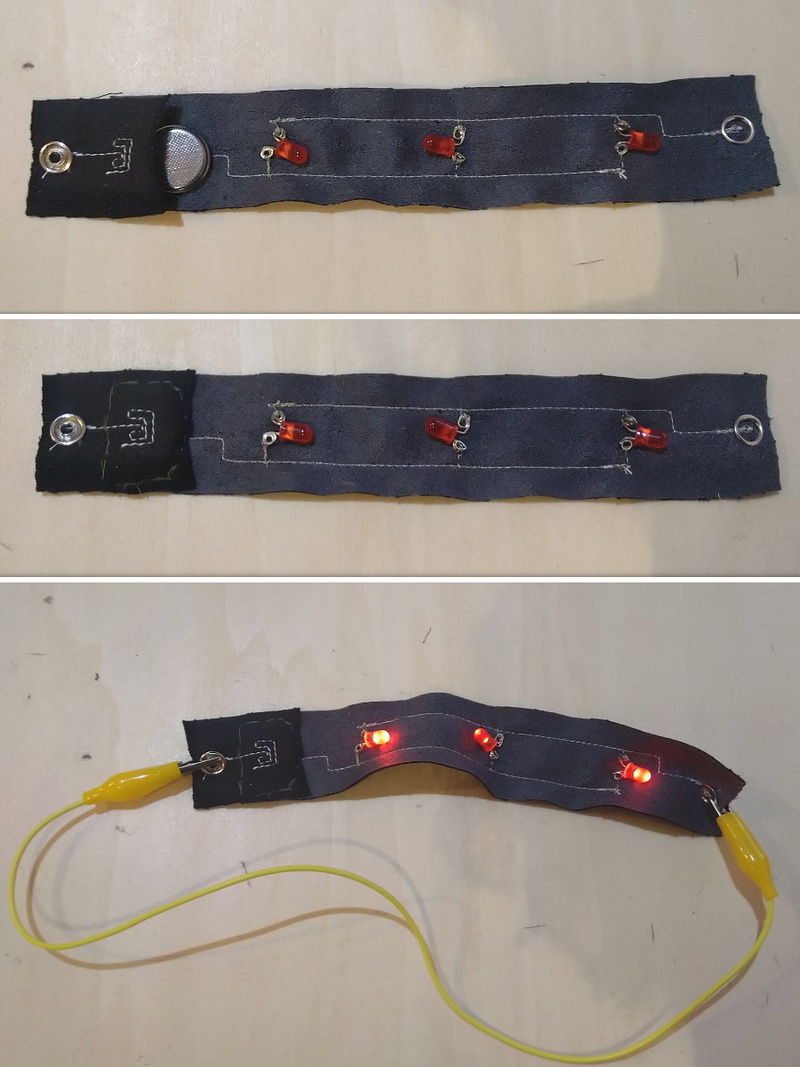 A better result with a sewing machine! And it works!

For my analog sensor, I wanted to try the fabric linear potentiometer that Liza Stark showed during the lecture.

I first tested my Arduino board with the blink script example:

I then tried to reproduce Liza's potentiometer, with a strip of copper fabric as conductor, and a strip of eeontex as resistor. I use a sewing pin to connect the two. 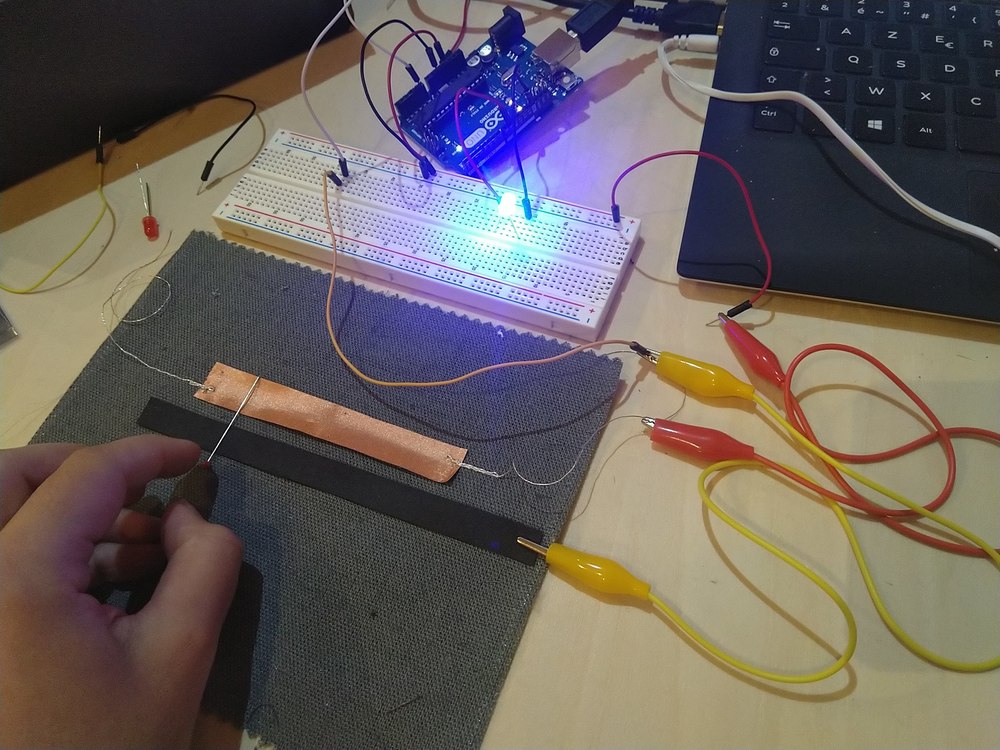 I mostly used Liza's code from the example, available here. I changed the values in the mapping to match what I was seeing in the serial monitor. The range of values I had was very restricted, and varied from one test to another (sometimes 270 to 280, but the next time 271 to 273), which I found weird. Maybe I should have made a longer circuit to have a wider range? 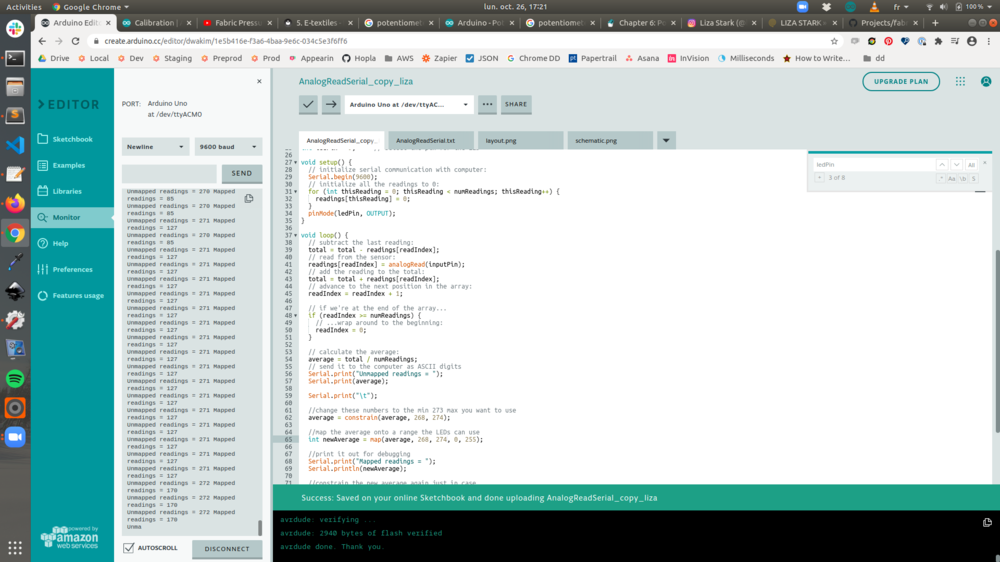 The serial monitor and the values I had

The potentiometer, varying in a not very consistent way

What I really would like to do with this is use it to control a sound instead of a light. I did not have a speaker to try this out, but I will probably try to create a speaker with thread and a magnet, like Adriana and Anastasia showed in yesterday's tutorial. 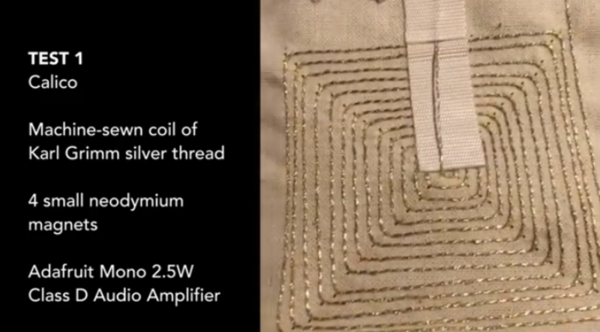 Last week, I had started cutting fabric to make a sweatshirt, and I knew it felt too empty on the front, so I wanted to embroider something there. So why not LEDs? The sweatshirt is not my design, it is a pattern from Deer and Doe, available here.

While talking with Pauline, I had the idea to embroider a constellation with some of the stars as LEDs. 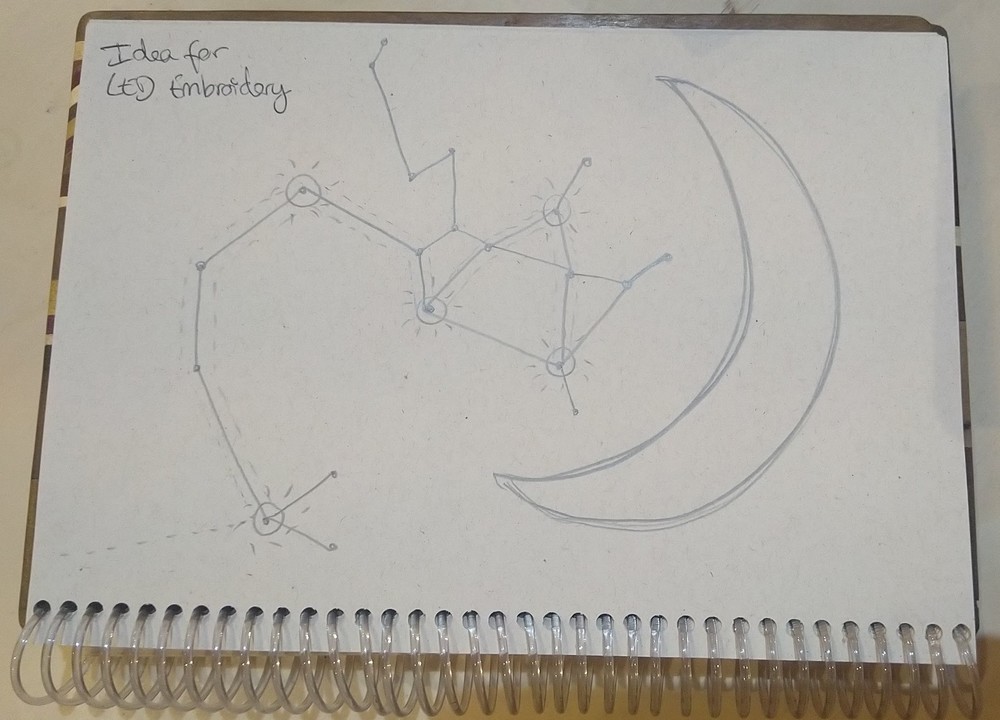 The first drawing I made for this idea

I wanted to use a 3V battery that I would hide in the hem of the sweatshirt, alongside a switch, so I used the same parallel circuit design than for the bracelet above. I integrated it in the design I imagined, using Affinity Designer. In the screenshot below, I purposefully changed the layers' colors to better differentiate the different threads: 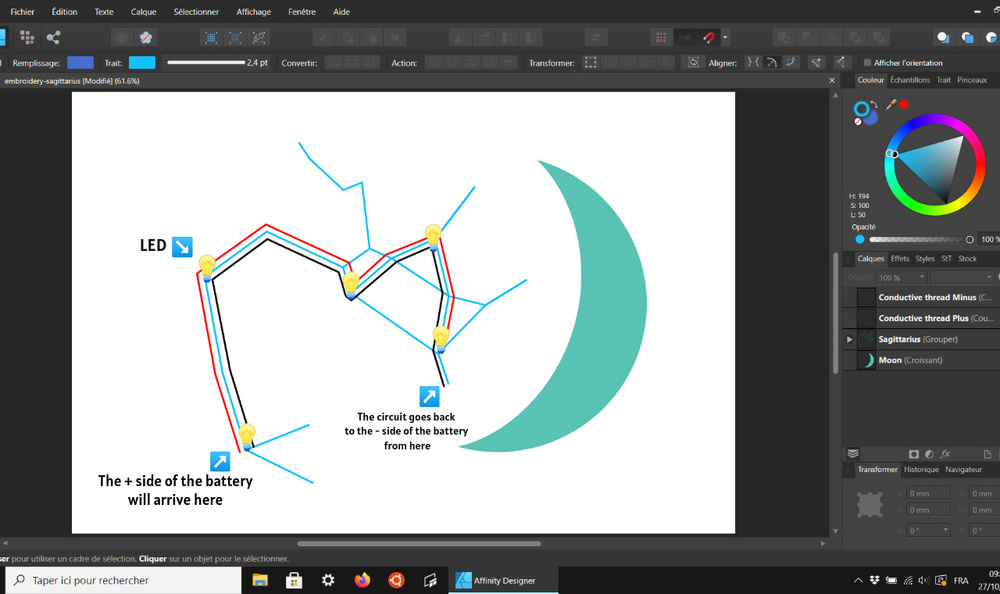 The design in Affinity

The schematics are actually the same as the bracelet, but with more LEDs.

Pauline helped me to use the embroidery machine we have at the Textile Lab (the Brother PR670E) to embroider the design.

🌜
Below is a screenshot of PEdesign, the machine's software. This is where we define which stitch we are going to use, and in which order. You can see the stitching order in the left column. In our case, I wanted to use: 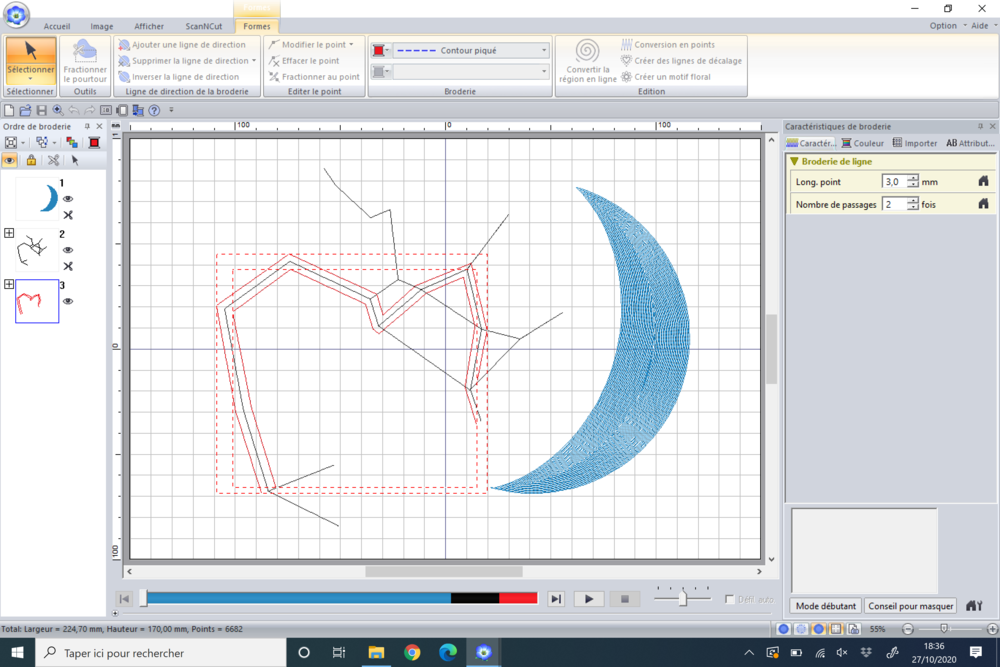 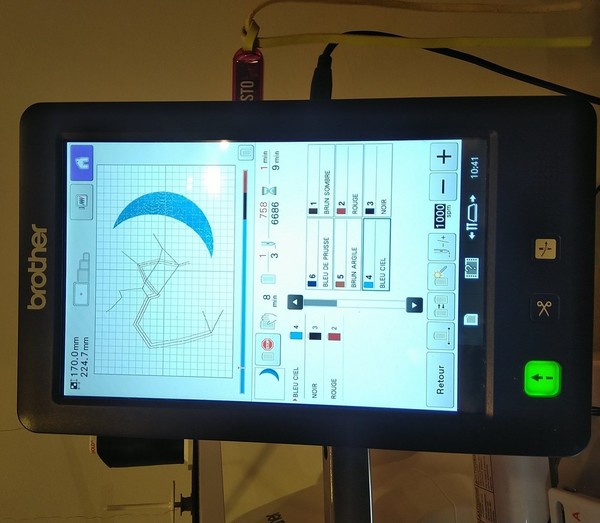 Here is the end result: 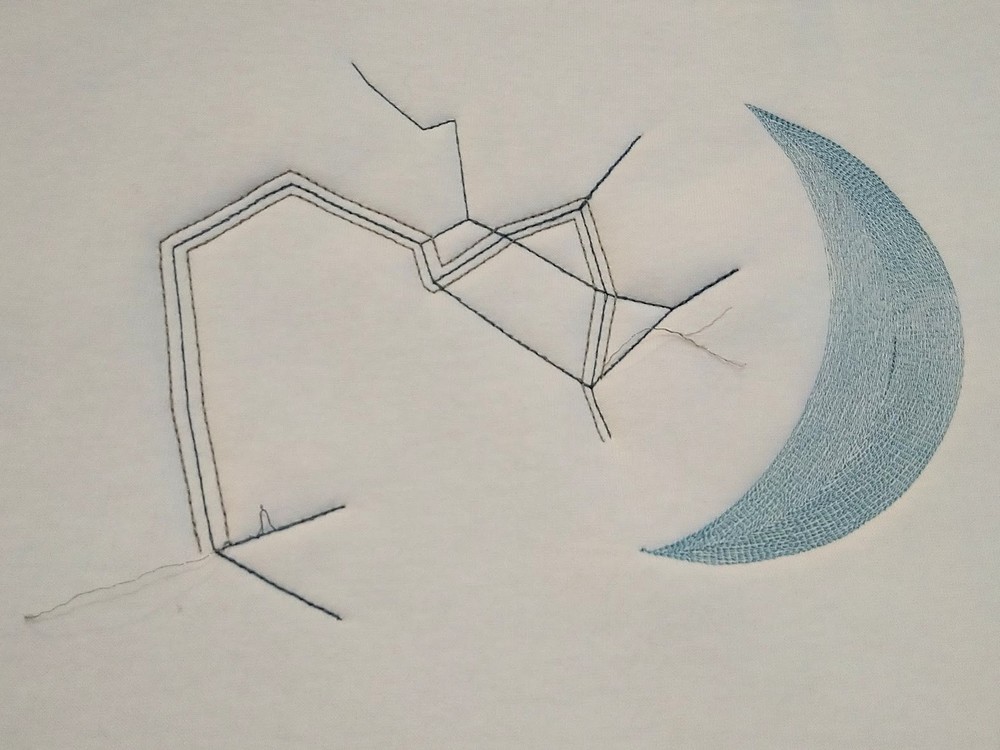 I then started to add the LEDs, using smaller LEDs from Adafruit. I was not sure which side was the positive one on these LEDs, so I tested one of them first with alligator clips. I then realised a very small "+" sign is printed on one side. I started sewing them on the sweatshirt, testing with alligator clips at every step:

Sewing the LEDs onto the circuit

Here is the backside. Some of the knots are already a bit frayed, I will have to glue them. 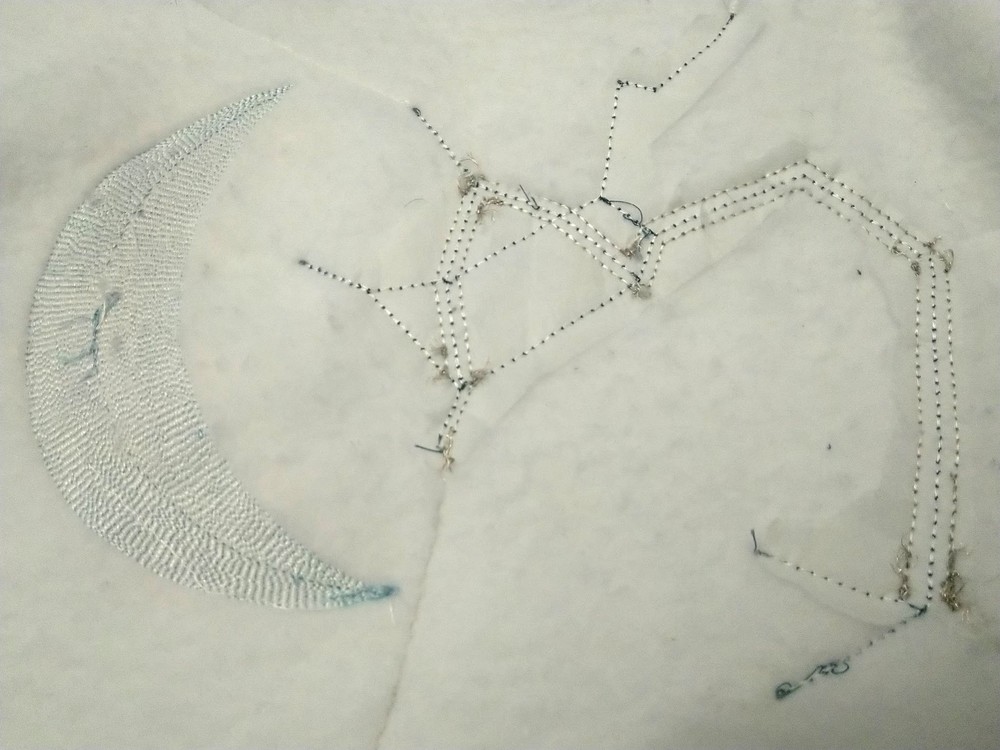 The backside of the circuit

I then started extending the circuit, by stitching all the way to the sides (and the hem) of the sweatshirt. To do this in a discreet way, I used the conductive thread in the bobbin, and white thread on top. I also added other lines around the design, with non-conductive thread. 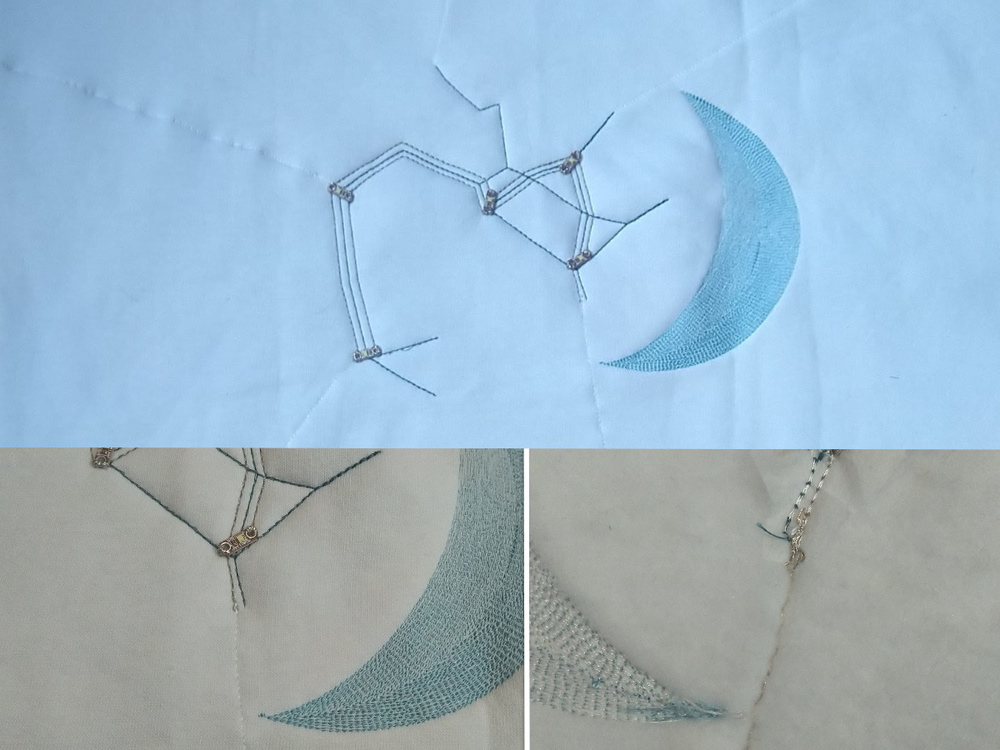 As I said before, I wanted to include a switch button in the hem, and now was the time to create it! I wanted to try a "momentary switch", which closes the circuit when pressed, and opens it when released. I created this switch with copper fabric and a foam piece with holes in between:

I tried fusing the copper pieces to the inside of the hem, but the interfacing I had was not working for this. Instead I sewed them, connecting each of them to conductive thread. I then encased the foam in this with non-conductive thread:

Inserting the momentary switch in the sweatshirt's hem

I then constructed the sweatshirt, and tested the circuit with the battery in my pocket and alligator clips (still testing at every step!):

My next step was finding a way to insert the battery in a removable way, so that it could be changed when needed, or removed when washing the sweatshirt. I decided to do it with this small battery holder (it's supposed to be hand-washable when the battery is removed): 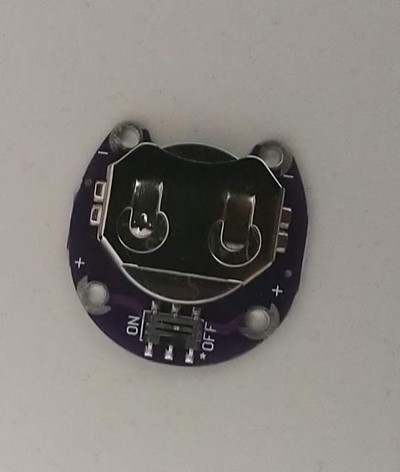 I finished the circuit with the thread, and inserted the battery holder in the hem. I then sewed the hem with a double needle, leaving a hole through which the battery is accessible. If I had thought this out better, I would not have put the battery in the front of the sweater... 🙈 This is definitely not my best hem, I might redo the front part.

On the left: the battery holder, inserted in the hem; on the right: definitely not my best hem

Here is what it looks like after finishing the sweatshirt: 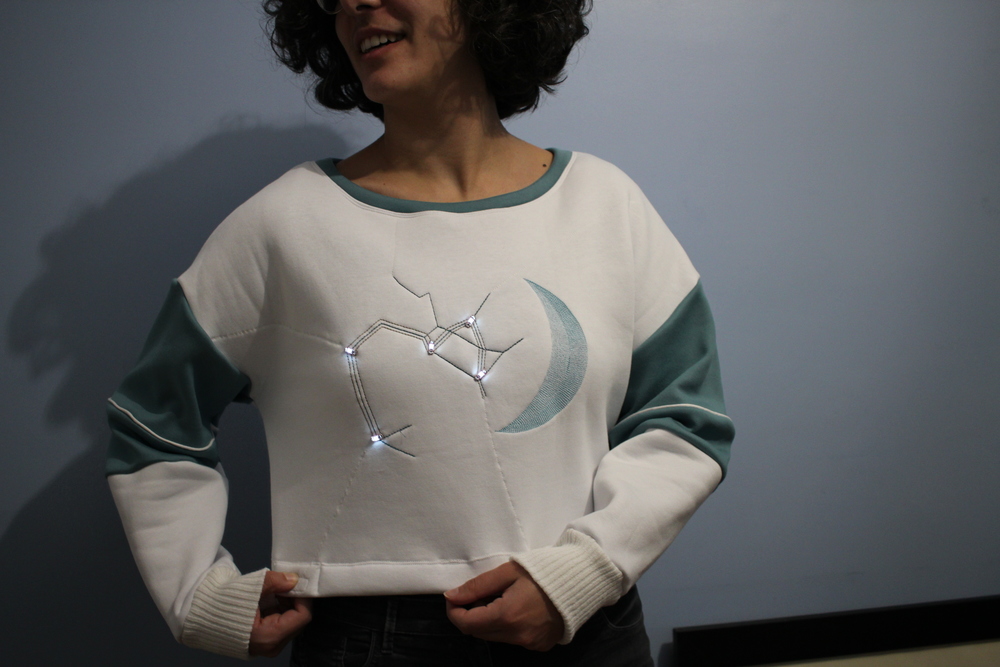 Below are all the materials I used this week, and suggestions of where to buy them. I did not buy many of them this week, as the Textile Lab had a lot of tools and materials available, and I added to this some Arduino starter kits I had from a few years ago.

I also use non-conductive "normal" fabric from my stash. For swatches, it is best to select a fabric that won't fray.

What I want to try next!

💡 More integrated lighting: I'd like to have LEDs that are more discreet than the (already small) ones I used. Either very small integrated LEDs, or placing the LEDs behind a thinner fabric

👩🏻‍🏭 Soldering: I haven't soldered anything this week! I have to find things to solder

🔔 Other inputs: I'd like to experiment more with analog sensors (I could have made a bend sensor on the elbow to light up my sweatshirt, for example), and also external inputs like sound